Continuing the discussion from ZoomSDK for macOS crashes at initSDK:

I’ve using Meeting SDK for macOS version 5.13.0.13865 (the latest atm).
My setup is probably mainly as the ZoomSDKSample distributed with the SDK - which works perfectly when running it locally with the jwt I generated, the correct Zoom ID and password.

The Xcode is Version 14.2, even if in this case it’s not relevant as the Sample compiles and works fine, but I get the same error which a couple of fellows have posted. Pity that both posts have been closed after 30 days with no solution. I really cannot see what’s wrong in my code. All frameworks are included of course.
So the issue is not related to the minimum client version the SDK requires, as @michael.zoom wrote - I guess.
The error occurs on the init line:

The only difference I can see is the deployment target, which is 10.13 in my project but 10.10 for the Sample. But there must be a difference… where is it… can you help me you guys that have faced it last summer?

Thank you for posting in the Zoom Developer Forum, I am happy to help here ! As a start can clarify if you are encountering an Assertion failed error when using integrating your App with Zoom SDK or the Sample APP? Additionally, are you only seeing any other error in the stack trace? If so, can you share the entire log? Reviewing the whole stack trace will help us better diagnose what may be happening.

I am looking forward to hearing back from you.

Thanks for the reply.
The crash only occurs in my app, the one called LibraryMediaplayer. The ZoomSDKSample distributed with the SDK works perfectly when running it locally with the jwt I generated, the correct Zoom ID and password.
There is no much data about the crash, I attach here the stack trace:

Thanks in advance,
Yours sincerely

The peculiar thing is that getAuthService returns a nil in my project, right after setting the dark model:

but it returns an object in the sample.
There must be something missing.

Strange! It seems like the getAuthService value is not being returned as expected. This is likely the reason you are seeing that behavior. Have you crossed reference your implementation against the Sample App? Also, what happens if you remove the setSupportDarkModel: YES, does the same behavior persist?

In the meantime, here are some helpful resources which include guidance on initialize the macOS Zoom Meeting SDK: 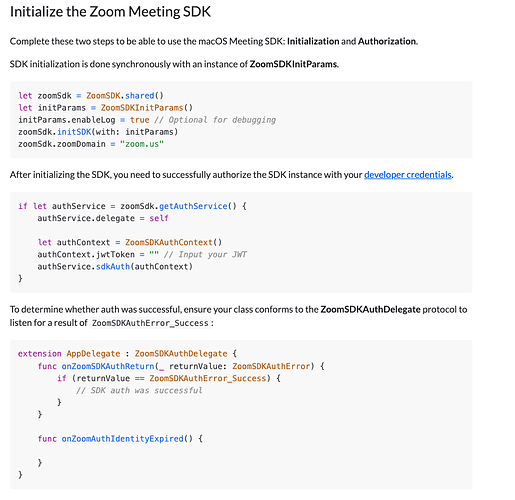 PKCE OAuth and the Meeting SDK for macOS

Removing the call to setSupportDarkModel does not make any difference.
Any help? Note that the microphone and camera permission strings in info.plist are set correctly.
Maybe it’s a minor issue, but I don’t see the framework called Aircon.app in the target’s frameworks, even if it’s positively referenced. Weird behaviour, any ideas about that?

As the error message has a line number in the source code, please @donte.zoom could you tell me what that line is doing?

The error you are seeing is often caused by the incorrect implementation of the SDK. It appears that the getAuthService value is returning nil, which can prevent the SDK from initializing successfully. To troubleshoot this issue, we recommend checking your project configuration against the sample project provided by us. Make sure that your project is set up according to the screenshot in the sample project, as failure to do so can cause the libraries to fail to load and the SDK to not initialize correctly.

You are right. There are some discrepancies in those lists in comparison with the sample project. Thanks for pointing it out

The fact is it’s very difficult to use the SDK as the way it has been implemented in the sample has not an installation script. It means Xcode adds references and build phases according to its standards. When Xcode does that and a user modifies those lists in the way they appear in the sample project, some other errors occur such as code signing. I hope you could make your developers aware of that. It would be wonderful to add an installation script for all the frameworks needed and their properties.

I’m glad you were able to solve the problem you were experiencing. You have a good suggestion that adding an installation script for all the necessary frameworks and their properties would be useful. It seems that not having an installation script can lead to unintended behavior. In effect, when a developer modifies the lists and Xcode changes accordingly, it can sometimes cause other errors, such as code signing. I will pass this suggestion along to our engineering team as I can see how it would help prevent similar issues in the future.

Please let me know if you have any additional feedback or comments.

Yes, thanks. And true, code signing can be an issue too. Besides the keychain permission dialog box, which appears every time I run the project

Thanks for the additional feedback, @giuggio ! I will be sure to pass it along to our engineer team.